Alicia Wilkinson is known for her patience and practical experience, when instructing her students and training horses. Kids and adults of all ages and skill levels feel comfortable and enjoy their lessons. 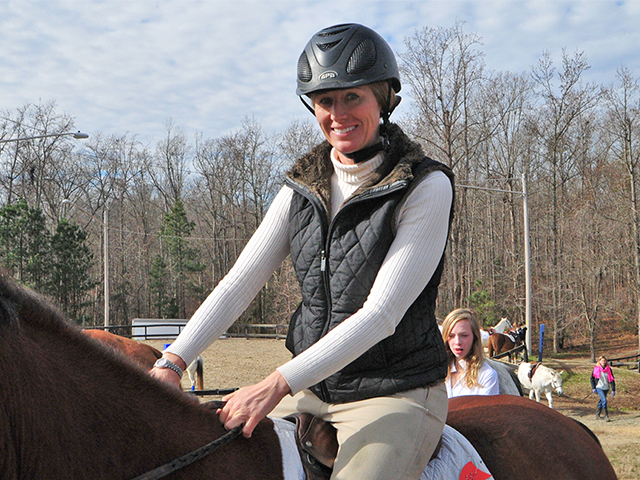 Alicia Wilkinson. Horses have always been Alicia Wilkinson’s passion. She began riding lessons at the age of six, and started training and showing competitively by the age of nine. She was successful on the “A” circuit, and started competing in the Juniors and Medal/ Maclays at the age of twelve. She consistently ranked within the top 5, every year, as a Junior in the Pennsylvania Horse Show Association, which is part of the United States Equestrian Federation (formerly known as the American Horse Show Association). Despite being told she was never going to make a living working with horses, she never questioned what she was going to do with her life. But, she recognized that she needed to be able to run a business as well as ride professionally. While attending college at Virginia Intermont (VI), located in Bristol, Virginia, she graduated Cum Laude with two degrees (a B.A. in Equine Studies and a B.A. in Business Management). During those years, she competed on the interscholastic Horse Show Association team for four years in the Open Division, often as the point rider. She represented the American National Riding Commission, traveling nationally and internationally. At graduation, she was named “Horse Person of the Year” out of 150 riders at VI, and immediately accepted an offer to relocate to the Charlotte area where she has been teaching for since 2001.

In 2006, Alicia formed her own business and continued training high caliber show horses and successful students.  Alicia is proud to call Charlotte, NC the home of Horse Show Leases, LLC where she teaches her students to successfully compete at horse shows.