If you aren’t familiar, you might think that pony classes, since they are only for riders under 18, are kid stuff.  Not even close. Ok, it’s true that kids compete in the classes, and that they are a ton of fun, but pony hunters are serious business, super competitive, and there are a lot of rules and regulations.

But don’t worry!  The Horse Show Leases team are veterans of Pony Hunter World and so we are here to help with all the pony info.  We are still early in the season, so it’s a great time to provide all the info on qualifying, preparing, and showing at the biggest pony event of the year- Pony Finals!

Let’s assume you don’t know anything about ponies or the divisions at horse shows. Everything outlined here deals with shows and ponies as they relate to United States Equestrian Federation (USEF)  events, or “A” shows, and is per current USEF rules. Rules for pony classes can seem a little complicated at first, so don’t feel too bad if it seems confusing!

The term “pony” directly relates to size, and they are divided into three groups. In the US, we measure horses and ponies in “hands (hh),” which is 4 inches (in Europe, they are measured in centimeters).

In order to compete in a Pony division at an A show, ponies must go to the show and be measured by the steward in order to have their size officially recorded.  Then they receive a “pony card” which serves as proof that they are competing in the appropriate division. 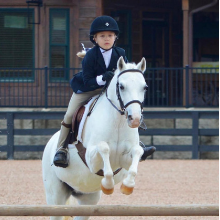 Lucy & Fiona (small pony) were champions of their division!

Pony cards are very important because historically, people love for ponies to be as big as possible without going over size requirements- this is because they tend to have a longer stride if they are bigger, which can sometimes give them an advantage in related distances on course. If someone thinks that a pony is oversize, they can pay to “challenge” a pony’s size.  At that point, the steward will remeasure to make sure they are the height they are supposed to be. In the past, ponies had to be within a half-inch of the height restriction upon challenge. However, that is no longer the case. They must be within the exact measurement.

There are several different types of pony divisions.  Each has their own jump height specifications, as well as rider age restrictions, again according to pony height. Plus, lengths of related distances (lines) are specific for each size group as well.  Lines are shortened slightly as ponies get smaller.

Children’s Pony: A lower height division which is not part of pony finals.  It’s a nice early step for a green pony, or an inexperienced rider to take before the serious pony classes. This division will not “break their green year.”

Ponies are eligible for this division for one year only. They can actually do the Regular Pony division the same year, but once they have completed one year in the Greens, they can’t do it again.  Except: If a pony competes no more than 4 times before September 1 in the Greens division, you can apply to have their Green year reinstated. So for example, if you have some rough shows, or your pony turns out to be greener than you thought, you can stop competing at apply for reinstatement, and then try again the next year.  See USEF Green Hunter FAQs for reference.  Also, any junior can show a Green pony- but they need to be a “suitable,”  appropriate size for the pony, or it can count against them.

Below, how pony size correlates to fence height and rider age for greens:

After completing their Green Year, this is the division to which ponies graduate. If ponies qualify for both Greens and Regulars, they must choose in which division they want to compete at Finals, and officially declare in advance.  Also, riders must not (except for a few exceptions), compete on another horse at heights over 3’6” at the same show in which they are showing a pony.

Below, how pony size correlates to fence height and rider age restrictions: 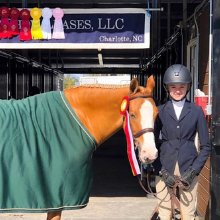 Pony Finals is supposed to be a competition of the best ponies in the country; so naturally, all the ponies must qualify.  As per current rules, you can qualify by being champion or reserve champion in your ponies division at an A-rated or AA-rated show.

Once you have qualified, you can celebrate a moment, but then it’s time to prepare! Pony Finals, as they are in 2019, are usually held in August at the Kentucky Horse Park (though not always).  As the Horse Show Leases team knows, it’s an incredibly memorable and valuable experience.

Now that you have all the Pony Hunter information, time to get ready for Part 2 next week: All About Pony Finals!  But if you can’t wait to learn all about it, or to find your next pony (or horse) contact our fearless leader, Alicia Wilkinson!

Jenn Crow
Equine Web Support Specialist at Top Line Media Team
Jenn Crow has been a lifelong barn rat, and a hunter/jumper professional for 20 years with a passion for teaching and operations, from lesson programs, to IEA Teams, to shows such as WEF, Harrisburg, and Washington. She also holds a Bachelor's Degree in Communication and has extensive web marketing and media experience, specific to the equine industry.